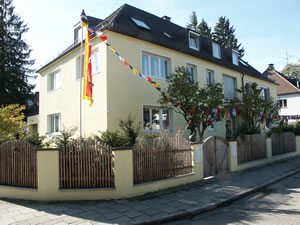 The Drikung Garchen Institut e.V. was founded in Munich in the year 2000 as a non-profit organization and has been a member of Deutsche Buddhistische Union (DBU, German Union of Buddhist Organizations) since April 2004. The aim of the Institute is to offer teachings, seminars, daily meditation and meditation retreats which convey Buddhism as practiced in the Tibetan tradition in an authentic manner, and thereby creating a foundation for Buddhism in the West.
In particular, the Institute is concerned with familiarizing interested Buddhists and non-Buddhists alike with the texts and meditation practices which have been preserved and taught by the Drikung Kagyü lineage over many centuries in Tibet  through listening, reflecting and meditating.

Moreover, the Institute is committed to promoting intercultural exchange between East and West, as well as to contributing to understanding between nations while fostering tolerance between individuals and societies through the teaching of compassion. Consequently, teachers of Tibetan Buddhism who come directly from Tibet, exiled monasteries in India and Nepal, as well as from western Buddhist centers, are invited to the Institute on a regular basis.

The Institute is funded solely by member's contributions, donations as well as fees charged for teachings and seminars. All of the regular courses and events are free of charge. We also support school and monastery projects in Tibet.